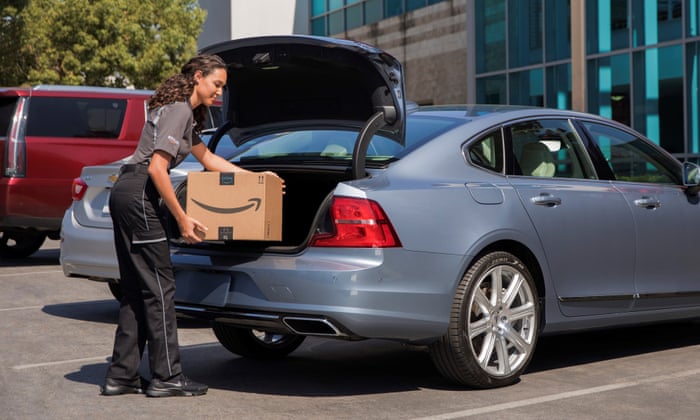 has begun offering deliveries direct to car boots for members of its Prime subscription service.

The new Amazon Key In-Car service is available in 37 US cities for owners of 2015 or newer Volvo or General Motors vehicles, including Chevrolet, Buick, GMC or Cadillac brands. The cars require GM’s OnStar or Volvo’s On Call connectivity services.

Users link their connected car to their Amazon account using the e-commerce firm’s Amazon Key app. No additional hardware is required, and deliveries can be made to cars parked in publicly accessible areas, such as a customer’s home or work.

The delivery person approaches the car, unlocks the boot (or trunk), puts the parcel in the car and then secures it, all without needing a key. Users get notifications through the Amazon Key app when their package is out for delivery, once it has been placed in the boot, and can track when their car was opened and closed. Amazon cannot track the location of a shopper’s car, instead they tell Amazon where the vehicle is parked using the app, along with the make, model, colour and licence plate number.

Atif Rafiq, chief digital officer at Volvo Cars, said: “Receiving a package securely and reliably in your car, without you having to be there, is something we think many people will appreciate.

“This mix of car and commerce is starting the next wave of innovation and we intend to be at the forefront.”

The in-car deliveries are an extension of the retailer’s existing in-home Amazon Key delivery programme, which was launched last year in the US, using smart locks and a camera to monitor deliveries. But this is not the first in-car delivery service.

“We have offered in-car delivery in Europe since 2015 through programs in the Nordics and Switzerland, and we believe that receiving packages should be as easy and convenient as ordering them online,” said Anders Tylman-Mikiewicz, vice president of consumer connectivity services at Volvo.

Amazon began testing direct-to-boot deliveries in Germany with a pilot partnership with DHL and Audi in 2015, allowing a small group of Prime subscribers in Munich to receive in-car deliveries. Amazon’s push for in-home and now in-car deliveries is part of the firm’s attempts to secure a larger portion of the grocery and regular consumables market, which has been stymied by the perennial problems of having to be at home to receive deliveries.

Read the full article here on the Guardian Website