Jeff Bezos keeps this inspiring quote on his fridge

eff Bezos is the richest person in the world, thanks to Amazon’s growing success — most recently the e-commerce giant’s billion-dollar acquisition of online pharmacy PillPack on Thursday helped boost Amazon’s stock. On Friday, Bezos, Amazon’s founder and CEO, was worth $141 billion, according to Bloomberg.

That success is inspiring to many, especially other entrepreneurs.

But sometimes even the richest guy in the world needs some motivation. So what does Bezos do? He recently revealed his source of daily inspo: a quote tacked on to his fridge.

In May, Bezos tweeted a photo of a printed out poem, captioning it, “Love this quote. It’s been on my fridge for years, and I see it every time I open the door. #Emerson.”

“To laugh often and much; to win the respect of intelligent people and the affection of children; to earn the appreciation of honest critics and endure the betrayal of false friends; to appreciate beauty; to find the best in others; to leave the world a bit better, whether by a healthy child, a garden patch, or a redeemed social condition; to know even one life has breathed easier because you have lived. This is to have succeeded.” 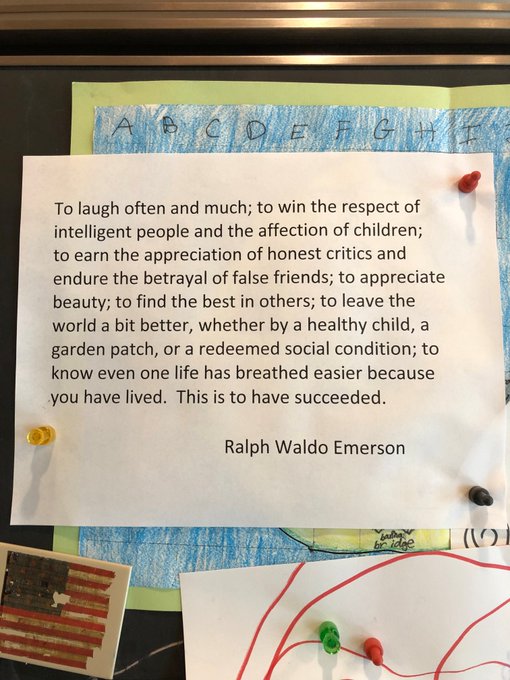 Love this quote. It’s been on my fridge for years, and I see it every time I open the door. #Emerson

Bezos gives credit for the poem to Ralph Waldo Emerson, and it has been widely attributed to Emerson. But the poem’s origin has been debated (it’s also been attributed to Bessie Anderson Stanley and Robert Louis Stevenson, according to the executive director of Poets.org).

Whoever the author, the poem is about success, and Bezos, founder and CEO of Amazon and the richest man in the world, is certainly successful by conventional means — his company has a $807 billion market cap.

While he might be best known for Amazon, Bezos also knows a thing or two about doing what you love, while still making a positive impact on the world, which are also common threads throughout the poem. He’s described outer space as a passion of his, and is the founder of the space company Blue Origin, on which he’s said he spends a billion dollars a year of his own money. He recently called his efforts with Blue Origin the most important work he’s doing, which he not only says is imperative, but also a passion of his.

“You don’t choose your passions, your passions choose you,” Bezos recently said of his commitment to space exploration during a forum on leadership. “All of us are gifted with certain passions, and the people who are lucky are the ones who get to follow those things.”

“[I]f I’m 80 years old, looking back on my life and the one thing I have done is make it so that there is this gigantic entrepreneurial explosion in space for the next generation,” Bezos also said in a 2016 interview. “I will be a happy, happy man.”

In the past, he’s also fleshed out the fun he has had building Amazon, and has been reported saying he “loves his job” and that “he tap dances into work.”

As for the part of the quote that preaches the importance of winning the affection of children, on social media, Bezos has revealed his soft side when it comes to his kids. He recently shared an Instagram post snuggled up with a giant stuffed animal with the caption, “Very comfortable on my kids’ giant panda doing mail and putting final touches on this year’s annual shareholder letter. About to take the kids to see Rampage…”

Since he posted it in May, the tweet of the inspirational poem has garnered more than 11,000 re-tweets and over 33,500 likes.

Bezos’ love for the quote is also aligned with his bookish tendencies: He’s known as an avid reader. Amazon started as an online book retailer, and there’s even reportedly a list of books Amazon employees refer to as “Jeff’s Reading List.” Books that have influenced Bezos’ leadership style reportedly include business management reads like “Built to Last: Successful Habits of Visionary Companies” by Jim Collins and the novel “The Remains of the Day” by Kazuo Ishiguro.

And while Bezos might be inspired by the words in the poem on his fridge, he’s also given his own fair share of advice on how to reach success. He’s well-known for his inspirational, annual shareholder letters, which are often considered a must-read by business professionals, and in interviews, often shares inspiring advice on how to reach success.

This is an updated version of a previously published story .